Passive fire protection products, such as fireproofing, is used to delay (or even prevent) the failure of steel and concrete structures that are exposed to the high temperatures found during a fire. They do this by thermally insulating the structural members to keep them below the temperatures that cause failure.

SFRM is composed of cement or gypsum and often contains other materials like mineral wool, quartz, perlite, or vermiculite. The gypsum or cement makes up the majority of the solution and is selected because it hardens as it dries. The other materials are used to help lighten the solution or to add air as in insulator. Chemical hardeners are sometimes used to either speed up hardening or to make the final fireproofing harder than normal.

Applied fireproofing is available as a wet or dry spray formula and can also be troweled on. The fireproofing is generally delivered as a dry powder in bag, which is then mixed with water in the field. Proper lung and eye protection is required during mixing and application.

Regulations and Codes Related to SFRM

The fire resistance of structures to which SFRM are applied are measured and defined by fire endurance tests such as ASTM E119, Standard Test Methods for Fire Tests of Building Construction and Materials.

The International Building Code 2018 discusses SFRM in Section 704.13. However, all of IBC Section 704 covers the Fire-Resistance Rating of Structural Members, which can be provided by spray applied fireproofing.

A Note About Restrained vs. Unrestrained Structures

Selection of the appropriate SFRM assembly often requires an understanding about whether your structure is considered restrained or not. Thicker applications are generally required in unrestrained conditions.

A restrained structure is one that can resist substantial thermal expansion under the full range of temperatures expected in a fire. Everything else is considered unrestrained. However, this isn’t something an architect simply decides. An engineering judgement must be made based on ASTM E119 (UL 263) Standard Test Methods for Fire Tests of Building Construction and Materials) and your structural engineer must clearly denote restrained structural elements on their plans.

Use of Spray Applied Fireproofing

Spray applied fireproofing is primarily used to protect rigid structural elements including columns, beams, metal decking, and some steel joists from the effects of heat generated during a fire.

While not its primary use, SFRM may also provide acoustical treatment and thermal insulation for large areas where the structural members and metal decking are left exposed, but treated with SFRM. This should be thought of as an added benefit since there are other materials specifically made for providing acoustical or thermal insulation.

Spray applied fireproofing is usually not suitable for surfaces exposed to moisture or high humidity levels. The moisture and humidity will deteriorate the products. In addition, the moisture may cause mold growth due to the porous nature of SFRM. However, some manufacturers make SFRM products that are able to handle humidity and freeze-thaw conditions.

The IBC code amendments have no impact on density requirements which remain independent from bond strength.

Low, standard, or commercial density (15-21 pcf) products contain gypsum as the binder. Low density SFRMs often provide higher yields and have faster coverage rates when compared with medium density products, which can reduce cost. However, low density products can flake away over time if they are exposed to contact from people, equipment, and even moving air so they should only be used when they are covered or protected.

Medium density (22-39 pcf) fireproofing generally contains a binder made from cement or a mixture of gypsum and cement. This provides a much more stable product that can withstand air movement and minor bumps and scrapes. Medium density fireproofing can be used in an exposed condition, but shouldn’t be used where contact by humans or equipment is possible.

High density [over 39 pcf] SFRM is usually made with a cement binder, which provides the hardest fireproofing product. High density is usually used in mechanical rooms and parking garages since it can withstand bumps and scrapes better than the lower densities.

Bond strength of spray applied fireproofing was spotlighted in the aftermath of the attacks on the World Trade Center in 2001. In this tragedy, the fireproofing was knocked off the steel columns and beams, which made them susceptible to the high temperatures of the fires that erupted.

The minimum bond strength requirement should be applied throughout a building requiring SFMR application.

It is a misconception that medium density SFRMs should be specified to meet high-rise building code requirements. Until recently, the only way to meet the new code requirements was to specify a medium density SFRM product because the market lacked low density products that could achieve bond strengths in excess of 430 psf. However several new low density products can now achieve the bond strength requirements for high-rise applications.

Manufacturers provide the thicknesses of their products needed to meet the various hourly ratings. These are based on the type and size of the structural members being protected. 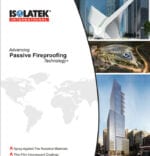 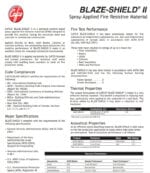 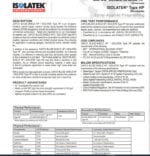 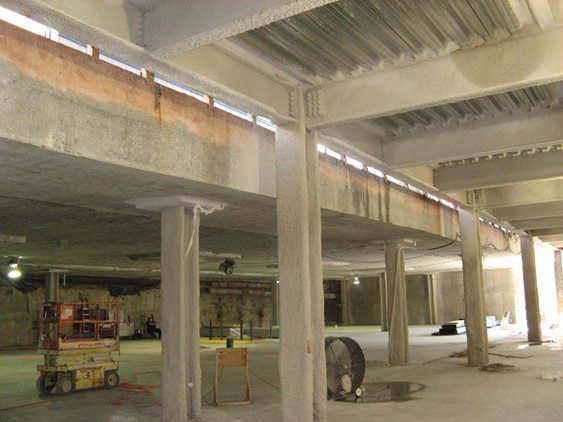 SFRMs should be applied following careful substrate preparation and in a safe working environment.

A minimum ambient temperature of 40F (4C) is required at least 24hrs prior to, during, and after SFRM application unless recommended otherwise by a manufacturer. Natural ventilation is appropriate in most cases at a rate of 4 air changes per hour or higher. Dedicated sources of electricity and water are required along with protection and covering for all materials not receiving the application.

The SFRM contractor needs to check substrates prior to application and ensure the following preparatory steps have been made:

SFRM is typically sprayed on using a Wet Spray or Dry Spray system in accordance with NFCA100.

Wet spray SFRMs are combined with water to form a slurry that is passed through a hose and dispersed with air through a nozzle. This procedure can improve installation time by 10 -15% per day.

Dry Spray SFRMs are conditioned through application equipment and then pneumatically passed through a hose to the nozzle where atomized water is introduced. Spray is then directed at the substrate and applied in an even uninterrupted pattern. Dry spray systems are useful if application occurs during severe weather conditions.

An alternate method of applying SFRM is by troweling the material onto required areas. This is recommended to be done following a spraying operation in each area to complete the SFRM coverage. The troweling method is also used to patch damaged or otherwise loose areas.

Heating and ventilation may be needed for curing. SFRM is susceptible to damage during the curing period so precautions to protect it should be taken. Ducts, piping, equipment, metal stud framing, and suspended material shall only be positioned after the SFRM has been fully cured.

In areas where SFRM has been removed, it should be repaired by a manufacturer approved and licensed contractor or NFCA Accredited Contractor. It is important to use the same or compatible material to maintain the approved UL design and fire resistance rating of the affected building.

Fireproofing is often installed immediately after the structure has been set, but before the various MEP systems have been put in place. Installation of pipes and ductwork usually require beam clamps, which requires fireproofing to be chipped away. Therefore, it is important that the contractor returns to patch the SFRM installation.

The following image shows a thin application of fireproofing, which requires an additional application or patching. 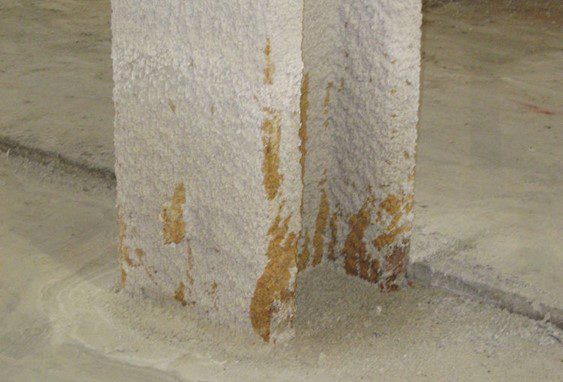 SFRMs generally require no maintenance, however property owners should periodically inspect fireproofed areas to ensure that applied SFRM material hasn’t been damaged. If it is found to be loose, cracked, or damaged it should be repaired immediately

It is critical that all spray fireproofing be applied based on the manufacturer’s recommendations in order to assure proper fire ratings and adhesion.

ASI is an experienced spray insulation contractor specializing in the application of spray foam, fireproofing and acoustical products for commercial, institutional and residential projects in the tri-state area since 1994